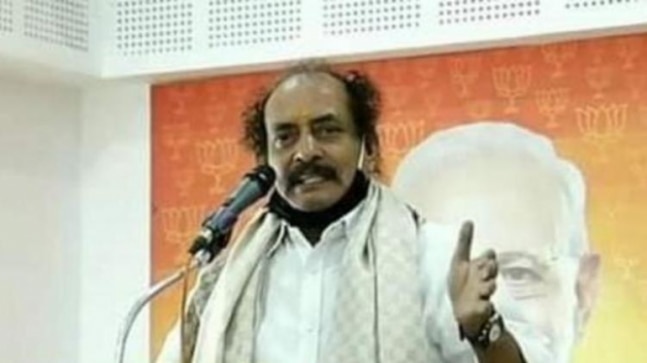 There are political and organizational reasons for BJP’s loss in Kerala: BJP’s CK Padmanabhan (Twitter)

Days after suffering a major setback in the state assembly elections, former BJP Kerala president CK Padmanabhan criticised the party’s state leadership. The North Indian model ‘Helicopter politics’ will not work with voters in Kerala, he said on Tuesday.

He also said that the Sabarimala issue did not prove to be effective for the BJP in the recently-concluded state assembly elections.

The entry of women into the Sabarimala temple as directed by the Supreme Court, was one of the major poll planks of opposition parties in the state. The Congress-led United Democratic Front (UDF) and the BJP-led National Democratic Alliance (NDA) used the issue to rake up anger against the ruling Left Democratic Front (LDF) during the campaign.

Padmanabhan also took a jibe at BJP state president K Surendran, who contested from two assembly seats and lost both. The party also lost the only assembly seat in Kerala it had managed to win in the 2016 assembly elections.

“The decision to contest from two seats was certainly taken by the central leadership. We know K Karunakaran who contested from two seats – Nemom and Mala – he won from both the seats. But we haven’t seen the state president of a party contesting from two seats. This has happened for the first time. The helicopter politics will not create any impact in Kerala. The tricks that would work with the people in North India will not work here,” Padmanabhan said.

He claimed that there are political and organisational reasons for BJP’s electoral loss in Kerala. His comments came after the BJP failed to manage even a single seat in the Kerala assembly polls held on April 6.

“There are political and organisational reasons for BJP’s loss in Kerala. We not only didn’t get the expected results but suffered a setback. Our groundwork and candidate selection ended a little late since the elections were announced amid K Surendran’s Vijaya Yathra. Chief Minister’s reputation too was an important factor in this election,” Padmanabhan told reporters.

Responding to Padmanabhan’s remarks, BJP state president K Surendran said he would examine the issues raised by his predecessor.

“I do not believe he made severe criticisms against me. But we will introspect everything he stated and find solutions to those issues. We cannot resist criticisms with haste. If such remarks are going to help us in the long run then we will take it forward in the right spirit,” said Surendran.