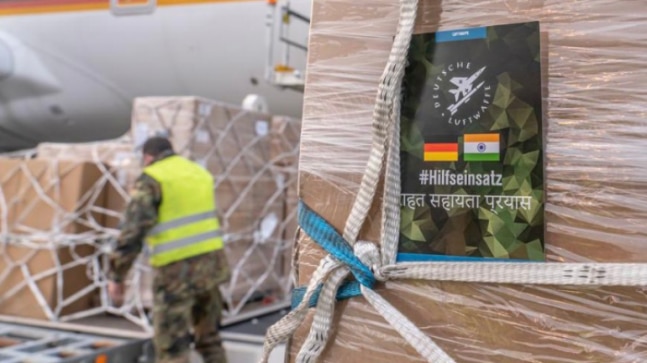 Germany is sending an oxygen generation plant and a team of experts to help Indian technicians set it up as part of its assistance to the country in this time of crisis. A batch of German ventilators is also due to arrive in Delhi on Saturday.

A German Air Force Airbus is due to land in India on Saturday woth 120 oxygen respirators (Picture Courtesy: Twitter @AmbLindnerIndia)

Germany has pressed its military into action to assist India in this time of crisis. Chancellor Angela Merkel issued a statement last week, expressing solidarity with the people of India.

In an exclusive interaction, German Colonel Dr Thorsten Weber, said an oxygen generation plant is being flown into India and will remain in the country for as long as it is needed.

Colonel Weber, who is also the spokesperson for the German Air Force, will be flying into India alongside the equipment.

Speaking to India Today TV from the Cologne Air Force Base in Germany, Colonel Weber said a technical team will also be arriving in India to help the Indian technicians set up the oxygen generation plant. The team will then return to Germany.

How many oxygen concentrators India has procured till now? Here’s a report. #ITVideo #CoronaCrisis pic.twitter.com/K0GCqRh8SH

A German Air Force Airbus with 120 ventilators/respirators is scheduled to land in New Delhi around 9.30 pm on Saturday.

Germany’s Ambassador to India, Walter Lindner, said these ventilators would be handed over for distribution without any delay. This will be done in close cooperation with the Indian Red Cross Society, the Ministry of External Affairs (MEA) and a number of other parties.

Germán Air Force Airbus A 350 with 120 oxygen respirators on route to Delhi. Appr touchdown 21:30. Immediately hand-over for distribution. Close coop with Indian Red Cross Society, MEA and others. Next: 2 A400 planes with oxygen plant.. pic.twitter.com/LoOCr9vrIW

German Foreign Minister Heiko Maas said on Saturday that Germany is bound by a deep friendship with India.

“The Covid19-pandemic strikes at the heart of India. We support India in its fight against the pandemic. Germany will send urgently needed goods to provide care to the patients,” said Maas.

We are bound by a deep friendship with #India. The #Covid19-pandemic strikes at the heart of India. We support India in its fight against the pandemic. Germany will send urgently needed goods to provide care to the patients. pic.twitter.com/z4HwS9OyaK

The first consignment of oxygen concentrators from Germany arrived in New Delhi on Thursday.

How Lockdown Is Stricter This Time