Elon Musk’s New Golden Six-Wheeler Looks A Bit Familiar, Can You Recognise It? 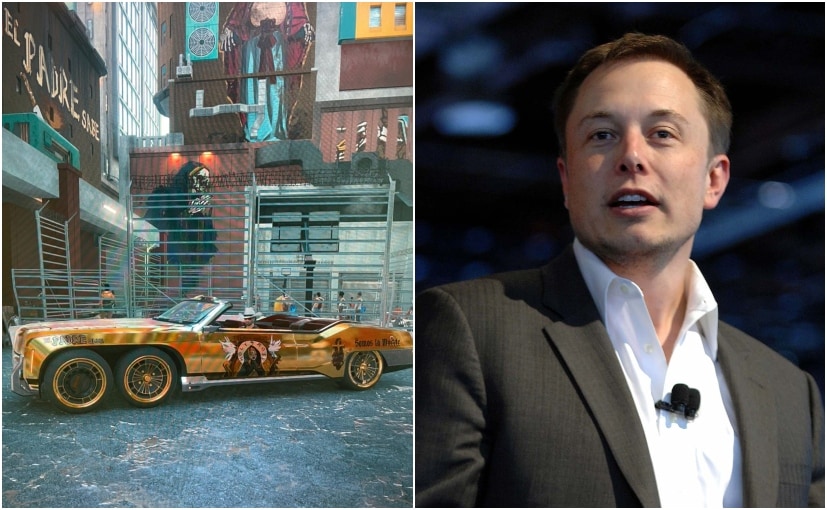 The new six-wheeler convertible is Elon Musk’s new car, according to the Tesla boss’ latest tweet, but Cyberpunk 2077 fans will exactly know where they’ve seen the car before.

Known for his electric cars and autonomous driving technology, you would be surprised that Elon Musk’s latest car isn’t a technological marvel or a bold move. In fact, Musk’s newest car is a six-wheeler that’s been added to his personal garage. The Tesla and SpaceX boss recently took to Twitter to share the image of his new car. He wrote, “Me in my sick new car (left him the money).” However, before you get your hopes up of this being a new retro-mod Tesla of sorts or an outlandish show of wealth by Musk, here’s where the true origins of the car.

Me in my sick new car

(left him the money) pic.twitter.com/EGaY1FVfHm

The tweet shared by Musk shows a golden convertible with six tyres and some detailed artwork. However, take a closer look and the image will appear to be a tad bit graphic-like in nature. That is because the image is a screenshot from the video game Cyberpunk 2077. The action role-playing video game was released late last year and is published by C Projekt. The car is a part of the game and not the real deal.

Since Musk posted the image on April 3, 2021, the tweet has garnered over 2.43 lakh likes and over 11,800 retweets, at the time of publishing this report. It also caused enough confusion among the followers of Musk. While one section of followers thought of it as a real purchase and opted to throw shade at the entrepreneur for his public display of wealth, the other section was quick to understand the joke.

No offense Elon Musk but I d¤n’t see what’s special abt ur new car, that’s a m!suse of ur wealth cos it’s a van!ty & d¤esn’t positively impact on the l!ves of others; Use ur wealth to help people. Furthermore ur electric cars are expens!ve, make a model majority can purchase…

Elon Musk is known to be a gaming enthusiast, especially that of Cyberpunk 2077. Earlier this year, Musk had tweeted about the ability to play the video game on the gaming computer inside the Tesla Model S. Musk has been playing Cyberpunk 2077 since its release and has occasionally shared his thoughts on the micro-blogging site. He praised the aesthetic of the video game but also made note of the bugs and glitches that needed to be fixed.

More recently, Musk shared his displeasure on Twitter pointing out that the video game cars needed to be self-driving and electric considering the game is set in 2077. Several users too caught on to this previously and pointed out that the game does not have any sort of in-depth traffic AI, which would otherwise add to the realism of the game. Similar role-playing games like Grand Theft Auto have had this from over a decade ago.

On the work front, Elon Musk is working on bringing the production versions of the Tesla Model Y, Cybertruck, Roadster and the Semi. The company reportedly is also working on beginning its India operations this year with a public launch by June 2021. The electric car maker registered its domestic office in Bengaluru earlier this year.

Facebook
Twitter
Pinterest
WhatsApp
Previous articleSA vs PAK: Pakistan Pacer Faheem Ashraf Makes A Mess Of Temba Bavuma’s Bat. Watch
Next article10/10 If You Can Guess The Actress In This Pic