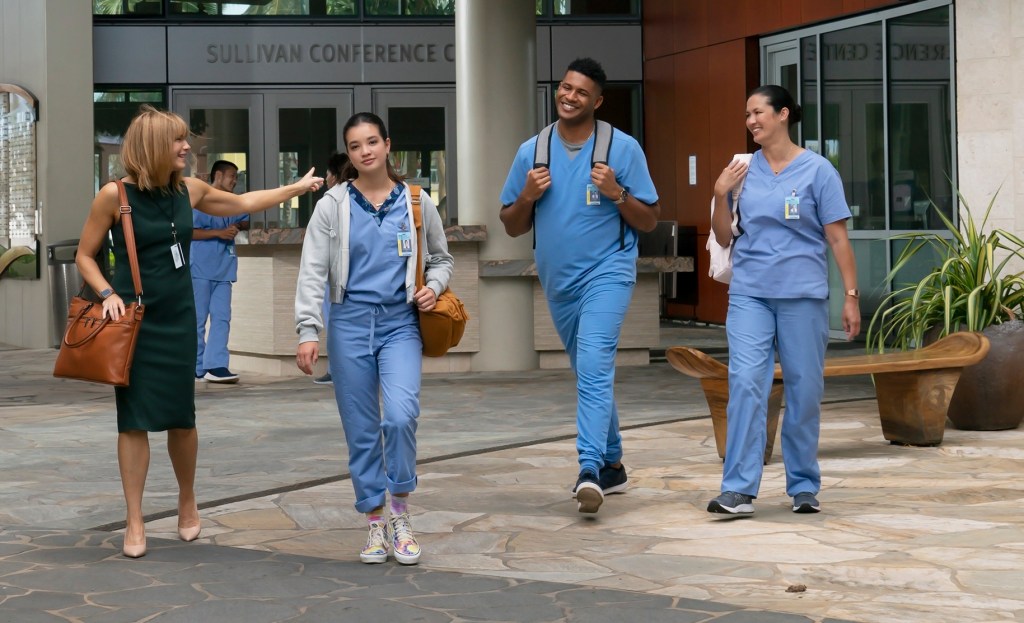 Doogie Howser creator Steven Bochco may not be around to see his story of a medical prodigy find new life with Disney+’s Doogie Kamealoha M.D., but the creative team continues to sing his praises.

“I think a lot of people don’t realize that the idea of a showrunner and what everyone in TV views as this structure that we have – of concept meetings and tone meetings – this was all something that Steven Bochco started,” Kang said.

Written by Kang and set in modern-day Hawaii, Doogie Kameāloha, M.D. follows the adventures of the titular character, a mixed-race 16-year-old girl (Lee), juggling a budding medical career and life as a teenager. Guiding Lahela (and also complicating things) is her family, including her spit-fire Irish mother who’s also her supervisor at the hospital, and her Hawaiian “Local Boy” father struggling to accept that his daughter is no longer his little girl.

For Kang, the fellow Carnegie Melon alum was “always held up as someone to admire.” She continued to praise the original series’ creator, recalling how he helped writers have more autonomy and creative control over the production of a series.

“I think he is a big reason why television is set up in a way that most supports writers,” she said. “I think writers everywhere owe a debt of gratitude to him.”

Jesse Bochco, Steven Bochco’s son, expressed confidence in the producing team and the stars of Doogie Kamealoha, including star lee who “blew our faces off” with her performance. For Jesse and Dayna Bochco, the trust they fell also translates over to the L.A. Law reboot, from Anthony Hemingway and Marc Guggenheim.

“I’m just thrilled to have smart, good people – L.A. Law‘s the same thing. We are working with brilliant, brilliant people and I think we’re going to get it to the world,” he noted.

Dayna Bochco, Steven Bochco’s widow who serves as an executive producer, added that her late husband’s legacy lives on with the creative team behind the Doogie reboot. Touting confidence in working with Mar, Kasdan and Kang, Bochco said she feels “Steven would love these people.”

“We felt very confident going forward because they were always respectful of what he had done and were also respectful of the ideas behind the concept, which was the child prodigy that doesn’t fit in either world,” Bochco said.

“He would love the show,” she said of the Doogie reboot. “I know he would.”