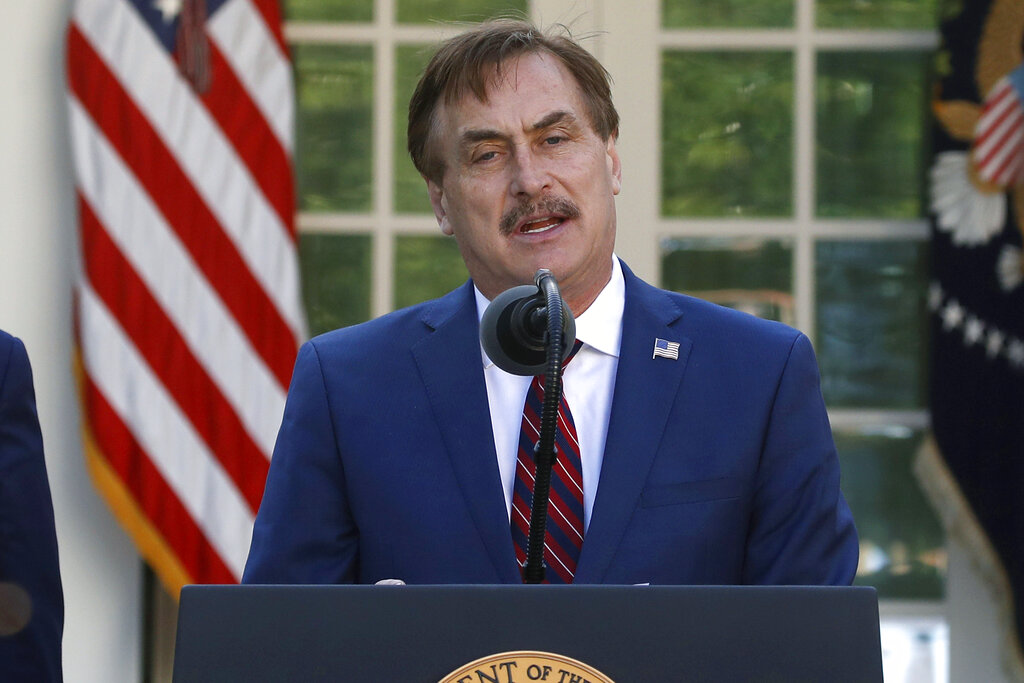 Dominion Voting Systems filed a $1.3 billion lawsuit against MyPillow CEO Mike Lindell on Monday, claiming that he defamed the company with his repeated allegations that it rigged the election against Donald Trump.

The lawsuit, filed in U.S. District Court, also accuses media outlets including Fox News, Newsmax and One America News Network of giving Lindell a platform to spread “the Big Lie” because they wanted to stay in the good graces of a major sponsor. None of the media entities are named as defendants in the lawsuit, but Dominion has previously said that it had not ruled out legal action against those who had “recklessly provided a platform for these discredited allegations.”

“After the Big Lie had been repeatedly disproven by hand recounts of paper ballots and after some of Lindell’s allies—like Sidney Powell and Rudy Giuliani—had been deplatformed by Fox News for peddling the lie, several media outlets—including Fox News— continued to give Lindell a global platform because they wanted to receive MyPillow ad dollars,” the lawsuit stated.

Dominion filed its lawsuit in the U.S. District Court in the District of Columbia, and it also names Lindell’s company, MyPillow Inc., as a defendant.

Dominion claims that Lindell was peddling the conspiracy theories for his own financial benefit.

“As when MyPillow previously faced legal action for deceptive marketing campaigns, Lindell knew there was no real ‘evidence supporting his claims,” the lawsuit stated. “And he is well aware of the independent audits and paper ballot recounts conclusively disproving the Big Lie. But Lindell—a talented salesman and former professional card counter—sells the lie to this day because the lie sells pillows. MyPillow’s defamatory marketing campaign—with promo codes like ‘FightforTrump,’ ’45,’ ‘Proof,’ and QAnon’ —has increased MyPillow sales by 30-40% and continues duping people into redirecting their election-lie outrage into pillow purchases.”

MyPillow did not immediately respond to a request for comment.

Dominion already has filed lawsuits against Rudy Giuliani and Sidney Powell, who had represented the Trump campaign as it pursued claims of election fraud.

Earlier this month, Lindell purchased time on One America to air a two-hour movie claiming election rigging. While the network included a disclaimer that the statements he made were “opinions,” Dominion’s lawyers said that the network “was content to deceive its viewers in exchange for ad dollars.”

“In a calculated attempt to avoid defamation liability for the lies it was about to knowingly broadcast to a global audience, OAN played a disclaimer effectively admitting that OAN knew Lindell’s claims were false but trying to pass them off as ‘opinions’ and brazenly claiming—contrary to months of OAN’s false reporting on Dominion, which had caused millions of Americans to question the results of the Presidential election—that the assertions in the sham ‘docu-movie’ were not adopted or endorsed by OAN,” the lawsuit stated.

Dominion singles out an appearance that Lindell made on Tucker Carlson Tonight on Jan. 26. Even though Carlson had previously acknowledged that Powell had failed to produce any evidence of machine fraud in the election, the lawsuit stated, Lindell was still invited on the show “to repeat the lie.”

“In exchange for MyPillow ad dollars, Fox News and Tucker Carlson introduced Lindell as ‘the CEO of MyPillow’ and endorsed Lindell’s lies that he ‘found’ the “machine fraud” and ‘ha[s] all the evidence’ —which Lindell did not produce on the show,” the Dominion lawsuit stated. “In addition, Lindell falsely claimed that Dominion had ‘hired hit groups, bots and trolls’ to ‘cancel’ him; Tucker Carlson—without asking for any evidence for that false claim or otherwise fact-checking it in any way—unquestioningly accepted and endorsed his biggest sponsor’s lie before Fox News broadcast it to millions of viewers.”

Fox News had previously ran a fact check of of claims that had been made against Dominion.

Another elections systems company, Smartmatic, filed a $2.7 billion lawsuit against Fox News earlier this month, and the network has defended itself by contending that it was well within the bounds of the First Amendment in reporting on items of national interest. After a legal threat, Fox News and Newsmax each ran fact-checking segments to rebut claims that had been made about Smartmatic by guests and on-air personalities.

Dominion’s lawsuit also claimed that Newsmax ran a “clarifying” segment about Dominion machine rigging because “it was worried about being sued for defamation — not because it cared about the truth.” Yet it still invited Lindell on its platform “to repeat the “Big Lie” that Newsmax “knew was false,” as it was unwilling to lose MyPillow ad dollars, the lawsuit stated. When Lindell appeared in air and began making election fraud claims, anchor Bob Sellers interrupted him and read a legal disclaimer. But Lindell continued to make the claims about the machine rigging, and Sellers walked off the set.

Lindell was invited back later that night, and he not only repeated his claim of “fraud with the Dominion machines,” but was given a chance to promote MyPillow products, the lawsuit noted. Newsmax was “groveling fealty to big sponsors over regard for the truth,” according to the lawsuit. On air the next day, Sellers said that Lindell was “a friend of this network” and that there was “no question I could have handled the end of the interview differently.”

“Mike also made clear he thinks Newsmax is great — his words — and I can tell you he will continue being an important guest on Newsmax,” Sellers said. Newsmax then replayed a portion of Lindell’s interview with Rob Schmitt, where Lindell plugged his two-hour documentary, called Absolute Proof.

A Newsmax spokesperson did not immediately return a request for comment.

Amy Jo Johnson’s third directorial effort is on the way. The “Flashpoint” actor will follow up 2017’s “The Space Between” and 2019’s “Tammy’s...
Read more
Hollywood

EXCLUSIVE: The TV and film arm of Quality Control, the record label behind hip hop artists including Lil Yachty and Migos, has struck...
Read more