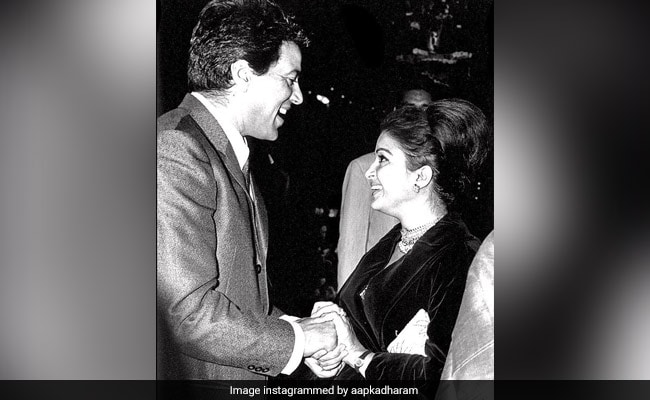 Dharmendra, who often shares throwback pictures of himself from his work diaries, posted a photo on Wednesday from his first meeting with his first-ever co-star Kamini Kaushal. Dharmendra, who made his debut with Arjun Hingorani’s 1960 film Dil Bhi Tera Hum Bhi Tere, shared in the caption that Kamini Kaushal was the co-star of his first film Shaheed, which released in 1948. Other than Kamini Kaushal, the film starred late stars Dilip Kumar, Leela Chitnis and Chandra Mohan in the lead roles. It was written and directed by Ramesh Sehgal. Sharing the black and white photo, Dharmendra wrote: “Pehli film Shaheed ki heroine Kamini Kaushal ke saath pehli mulaqat ki pehli tasvir…Donon ke chehron par muskurahat… ikk pyaar bhara introduction (My first meeting with the heroine of my first film Shaheed, Kamini Kaushal…there is smile on both our faces…an introduction filled with love).”

Dharmendra and Kamini Kaushal went on to co-star in Aadmi Aur Insaan, Khuda Kasam and Yakeen.

Dharmendra’s Instagram is filled with pictures of the veteran actor with his co-stars. A few days ago, he shared a throwback picture with late actress Shyama and wrote: “In the very beginning of my film career …. A film with Shyama was started and shelved…Friends, always thankful to you for your loving response.”

Meanwhile, also check out this photo of Dharmendra and Shabana Azmi:

He is also known for his performances in hits like Sholay, Phool Aur Patthar, Kaajal, Dharm Aur Qanoon, Bhagawat and Charas. He was last seen in the 2018 film Yamla Pagla Deewana: Phir Se, which also starred his sons Sunny and Bobby Deol. His next film is Apne 2 the sequel to his 2007 film Apne, co-starring his sons.