Death of Covid patients due to non-supply of oxygen not less than genocide: Allahabad HC 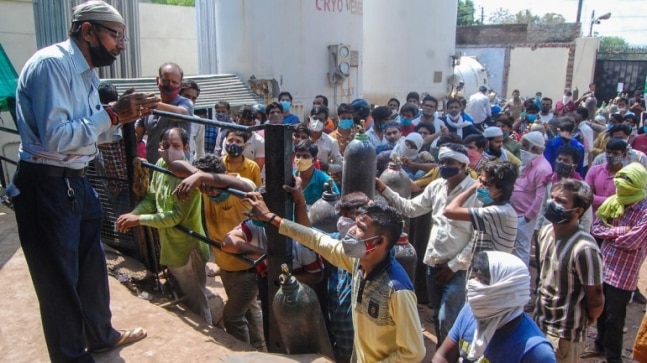 At an oxygen refilling centre in Kanpur (Source: PTI)

The Allahabad High Court came down heavily on authorities responsible for oxygen supply chain in Uttar Pradesh, saying the death of Covid-19 patients just for non-supply of oxygen to hospitals was a criminal act and “not less than a genocide”.

A bench comprising Justice Siddharth Verma and Justice Ajit Kumar made the remarks on reports circulating on social media regarding the death of Covid-19 patients due to lack of oxygen in Lucknow and Meerut.

“We are at pain in observing that death of Covid patients just for non-supplying of oxygen to the hospitals is a criminal act and not less than a genocide by those who have been entrusted the task to ensure continuous procurement and supply chain of the liquid medical oxygen,” the court observed.

READ | ‘My mother will die’: Agra man begs cops not to take away oxygen cylinder

“How can we let our people die in this way when science is so advanced that even heart transplantation and brain surgery are taking place these days,” the court said.

“Normally, we would not have directed the state and district administration to enquire into such news that have been viral on social media, but since the advocates who were appearing in this PIL supported such news and even submitted more or less situations in other districts of the state are the same, we find it necessary to direct for immediate remedial measures to be taken by the government.” The court said.

There were reports that five patients had died at Medical College, Meerut, last Sunday. Sun Hospital in Gomti Nagar, Lucknow, and another private hospital in Meerut also failed to give oxygen to patients after its supply was not made even after repeated SOS calls to the authorities.