Count The Stars In This Throwback Pic Shared By Amitabh Bachchan 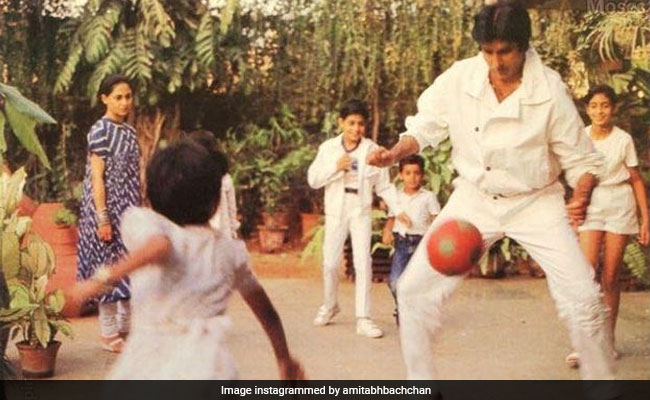 Amitabh Bachchan dug out a special throwback picture on Sunday. The occasion? Well, the Bollywood veteran decided to mark National Sports Day by sharing a throwback picture. In the photograph, Big B can be seen playing with a ball as son Abhishek and daughter Shweta Bachchan Nanda watch him. We also got a glimpse of Big B’s wife Jaya Bachchan in the backdrop. The actor did not reveal when or where the picture was taken but we simply love it. He simply captioned the post: “National Sports Day.” Meanwhile, Abhishek Bachchan too shared a special post on the occasion of National Sports Day. See the posts shared by them here:

Bollywood veterans Amitabh Bachchan and Jaya Bachchan got married in June 1973 and they have featured together in films such as Zanjeer, Sholay, Abhimaan, Mili, Chupke Chukpe and Silsila, among many others. Jaya Bachchan appeared only in a handful of films after the birth of Shweta Bachchan Nanda and Abhishek Bachchan. In more recent years, Big B and Jaya appeared together in movies like Kabhi Khushi Kabhie Gham and the 2016 film Ki And Ka.

Abhishek Bachchan will next be seen in a film based on Bob Biswas, which is being produced by Shah Rukh Khan’s Red Chillies Entertainment. The actor recently starred in The Big Bull, which opened to mixed reviews on Friday. In 2020, the actor had two releases – Anurag Basu’s Ludo and Amazon Prime’s web-series Breathe: Into The Shadows, which marked his digital debut. He will reportedly star in Gulab Jamun, co-starring his wife Aishwarya Rai Bachchan. The actor will also star in a film called Dasvi with Yami Gautam and Nimrat Kaur.

<!-- -->Medical board did not disagree with the findings made in the ultrasound report: CourtNew Delhi: The Delhi High Court has allowed a...
Read more