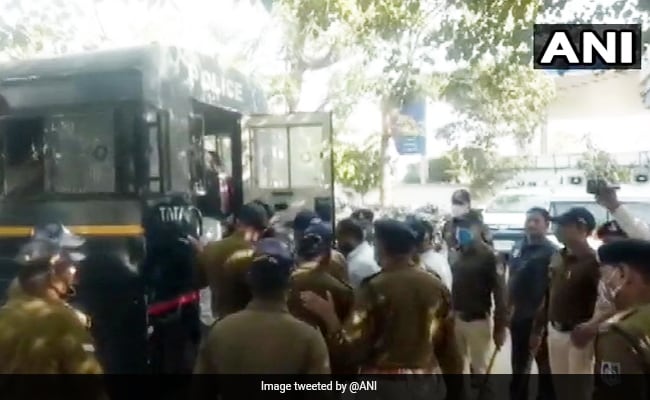 Former Madhya Pradesh minister PC Sharma said he and several other Congress leaders and workers were detained here by the police on Saturday during the state-wide half-day ”bandh” called by his party to protest against the rising fuel prices.

The call for half-day bandh has so far evoked mixed response as many shops in Bhopal and elsewhere could be seen functioning as usual.

While the ruling BJP said the bandh has failed, the opposition Congress claimed that it has received a good response.

Talking to PTI, Mr Sharma said, “I was detained from the bus stop number 6 with other Congressmen while we were requesting the shop owners to get the shutters down.”

“I have been brought to the central jail campus with other Congressmen,” he added.

“Our bandh is getting a good response,” he claimed. State BJP’s chief spokesman Deepak Vijayvargiya said the Congress has no bearing in the state and its bandh has completely failed.

In a few districts of the state, including Indore, there were reports of standoffs between the police and the protesters.

“Police came to my petrol pump and asked us to open it. On the other hand, the Congressmen are requesting us to keep the facility shut,” an owner of a petrol pump told PTI.

“We are caught in the crosshairs,” he said. State Congress chief Kamal Nath had on Friday urged the people to join in the ”bandh” in order to “wake up the government over the soaring prices of petrol, diesel and cooking gas”.

Meanwhile, MP Petrol Pump Owners” Association secretary Nakul Sharma said that additive-mixed petrol of a leading oil marketing company is now priced at Rs 102.26 per litre, while regular per litre petrol is being sold at Rs 98.58 and diesel at Rs 89.21 in Bhopal.

(adsbygoogle = window.adsbygoogle || ).push(); <!-- -->The three boats were brought to Vizhinjam by the Coast Guard (Representational)Thiruvananthapuram: The Indian...
Read more