Comedian Bharti Singh Being Questioned By Anti-Drugs Agency After Raid 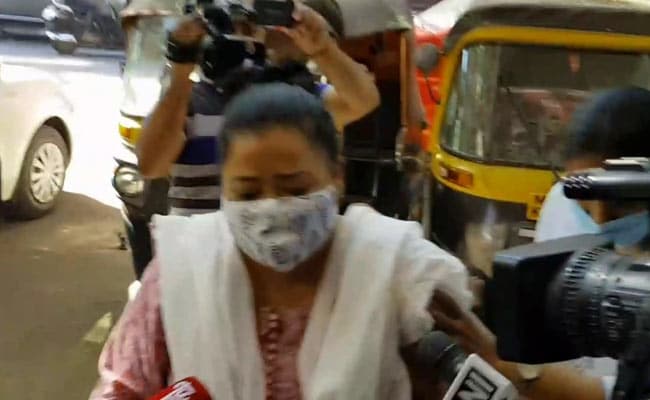 Comedian Bharti Singh and her husband, Harsh Limbachiyaa, have been taken to the Narcotics Control Bureau (NCB)’s Mumbai office for questioning after the anti-drug agency recovered a “small quantity of cannabis” during a search of their home this morning.

Visuals from outside their residence – an apartment complex in Andheri – showed Ms Singh being driven away in a red Mercedes, while Mr Limbachiyaa was taken in a white NCB van. Ms Singh, on arriving at the NCB’s office, told reporters: “They have called us for some questioning, that’s all.”

“She (Ms Singh) and her husband have been detained for questioning about possession of narcotics substances,” Sameer Wankhede, one of the investigating officials, told news agency ANI earlier.

According to another NCB official, quoted by news agency PTI, Ms Singh’s name emerged during questioning of a drug peddler; a search of her home recovered a “small quantity of cannabis”. The agency also carried out searches at two other locations in Mumbai, the official added.

The raids come amid an expanding probe – which began with inquiries into the death of actor Sushant Singh Rajput in June – into alleged drug use by members of the entertainment industry.

Earlier this month actor Arjun Rampal’s home was searched, and both he and his girlfriend, Gabriella Demetriades, were summoned for questioning.

Ms Demetriades was questioned over two days (for a total of 12 hours) while Mr Rampal was questioned for six hours last week. As he was leaving the agency’s office in south Mumbai, he clarified that the substances found by the NCB at his residence were part of a prescription.

“I am fully cooperating with the investigation. I have nothing to do with drugs. The medicine found at my residence was prescribed. The prescription has been found and handed over,” he said.

The NCB had earlier also arrested Paul Bartel, an Australian architect whose name emerged as an alleged supplier after the questioning of Agisialos Demetriades – a South African national who is Ms Demetriades’s brother and is currently in the agency’s custody.

Mr Bartel was granted bail on Thursday. According to news agency PTI, the special court that granted him relief observed there was no “substantial material” to prove wrongdoing on his part.

Prior to that the NCB had also summoned film producer Firoz Nadiadwala. A day earlier his wife, Shabana Saeed, was arrested after investigators allegedly found 10 grams of marijuana at their home in Mumbai’s Juhu during a raid. Ms Saeed has since been released on bail.

The Nadiadwala residence had been searched following the arrest of drug peddler Wahid Abdul Kadir Shaikh in Andheri a few days before that. As the agency tracked Shaikh’s clients, links to Ms Saeed, who allegedly purchased 10 grams of the contraband from him, emerged, the NCB said.

Over the last few months top Bollywood actors Deepika Padukone, Sara Ali Khan, Rakulpreet Singh and Shraddha Kapoor have all been questioned by the NCB. The agency has said this is part of its attempt to unravel a network of supply of drugs to celebrities.

The drugs angle in Sushant Rajput’s death was flagged after texts about the purchase of banned substances were allegedly found on his girlfriend Rhea Chakraborty’s phone.

Ms Chakraborty, her brother Showik, two of Sushant Singh Rajput’s employees and a few others were arrested for allegedly arranging drugs for the 34-year-old actor. After nearly a month in jail, Ms Chakraborty, who is also an actor, was released on bail last month.

The allegations have split the film fraternity, with one section hitting out at the vilification of the industry. Many well-known actors and filmmakers have been trolled over the allegations.

“I’ll be a liar if I say that this problem does not exist in our industry. It exists, just like every industry. But every person in every profession is not involved in such problems. This is impossible,” actor Akshay Kumar said in October.

With input from ANI, PTI