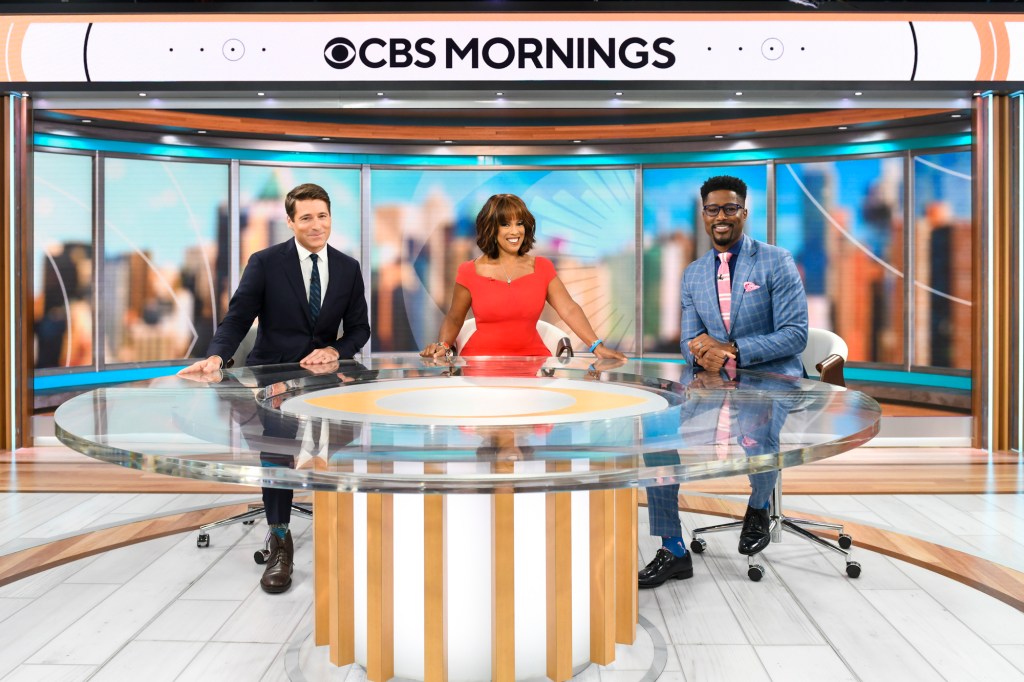 When Nate Burleson joins Gayle King and Tony Dokoupil as co-host of CBS’s morning show next month, the program will have a new look, theme and name: CBS Mornings.

The changes, to launch on Sept. 7, will connect all of the morning shows together with some of the elements of its long running CBS Sunday Morning, including the use of the sun logo and trumpet music. The first hour of the weekday broadcast will still be devoted to hard news and conversation, while the second hour will feature expanded feature reporting, a central part of the Sunday show, as well as live interviews, arts and culture pieces from Anthony Mason, who recently was co-host, and Vlad Duthiers with the What to Watch segment.

In addition to Burleson’s debut, CBS Mornings will broadcast from a new Times Square studio, a previously announced change for the show, in the space previously occupied by MTV’s Total Request Live.

“There is something about being in the heart of the city that’s special,” Burleson told Deadline. “So visually, aesthetically, there is a new look. But as far as the show itself, we want to stick with the rich tradition that we have of staying true to our journalistic approach early in the seven o’clock hour, giving people what they need. And then we tap into our storytelling, and we have individuals all across the board, not just on our set, but the weekend crew, all of our correspondents and reporters in the field.”

These are the first major changes to the broadcast since Shawna Thomas was named executive producer earlier this year, and the network named Neeraj Khemlani and Wendy McMahon as president and co-heads of CBS News and Stations, combining two divisions of the company.

In a statement, Khemlani said, “All CBS News morning broadcasts will now be part of the same family, with a focus on original reporting and exquisite storytelling, connected by the sound of the iconic trumpet music and an ethos of optimism that carries all the way through to the sunshine logo itself. We’re adding a little bit of CBS Sunday Morning – every morning – on CBS Mornings.”

The weekday show has been titled CBS This Morning since 2011. Although it has gained some traction as a newsier alternative to its broadcast rivals, it is still in third place in the ratings. Burleson’s addition to the show is the latest co-host change since the exit of Charlie Rose in 2017.

Thomas said that CBS Mornings “won’t shy away from complicated topics or uplifting moments. Come September, the energy of our new anchor team will bring all of this together to help viewers understand and engage with their world.”

The Saturday broadcast also will air from the Times Square studio starting Sept. 18. It will have the name CBS Saturday Mornings, with Jeff Glor, Dana Jacobson and Michelle Miller. Brian Applegate is executive producer.

The studio features such things as touch screen technology, augmented reality and LED walls, as well as floor to ceiling windows on the second floor.

CBS Sunday Morning, which launched in 1979, will retain its studio, set and format, with Jane Pauley as host. Rand Morrison is executive producer.

King, Duthiers and Dokoupil did a video segment of the changes, below.

We’ve got some personal news… we’ll soon be moving to our brand new studio in Times Square!

We’ll also have a new name and theme when @NateBurleson joins @GayleKing and @TonyDokoupil at the table beginning September 7.

Check out a sneak peak of #CBSMornings! 🌞 pic.twitter.com/bOp43O1KHH

Facebook
Twitter
Pinterest
WhatsApp
Previous articleTelegram is now a big player in India: What this means for the company and the users
Next articleManoj Malaviya Appointed West Bengal’s Interim Director General Of Police