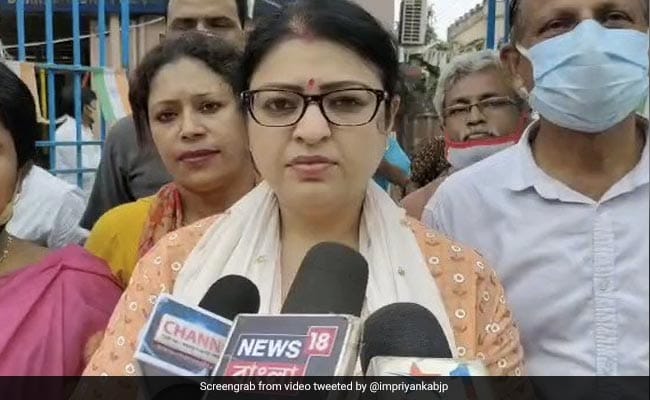 Priyanka Tibrewal has rubbished all allegations levelled by the Trinamool (File)

Priyanka Tibriwal, BJP’s candidate from Bhabanipur Assembly constituency, on Wednesday replied to the notice sent by the Election Commission over complaints of Model Code and Covid-rule violations.

“They said a number of cars were following me for nomination. But I cannot stop the general public vehicles as the Chief Minister does. I only participated in a ‘kirtan‘ which was organised by the locals and not by me,” she added.

The BJP candidate further said, “I had challenged Mamata Banerjee’s nomination, so she has made this complaint to harass me. It doesn’t matter, as they won’t be able to prove anything because I didn’t do anything.”

Earlier in the day, the Bhabanipur constituency’s Returning Officer sent a notice to BJP candidate Priyanka Tibrewal, asking her to reply as to why permission for her further rallies shouldn’t be withdrawn. The notice cites violation of Model Code of Conduct and Covid protocols by them on the day of filing of her nomination, September 13.

Bhabanipur by-polls will primarily be a contest between Priyanka Tibrewal and Mamata Banerjee as the Congress on September 8 announced that the party will not be fielding any candidate for the by-polls.

By-polls will be held in Bhabanipur on September 30 and results will be declared by October 3.