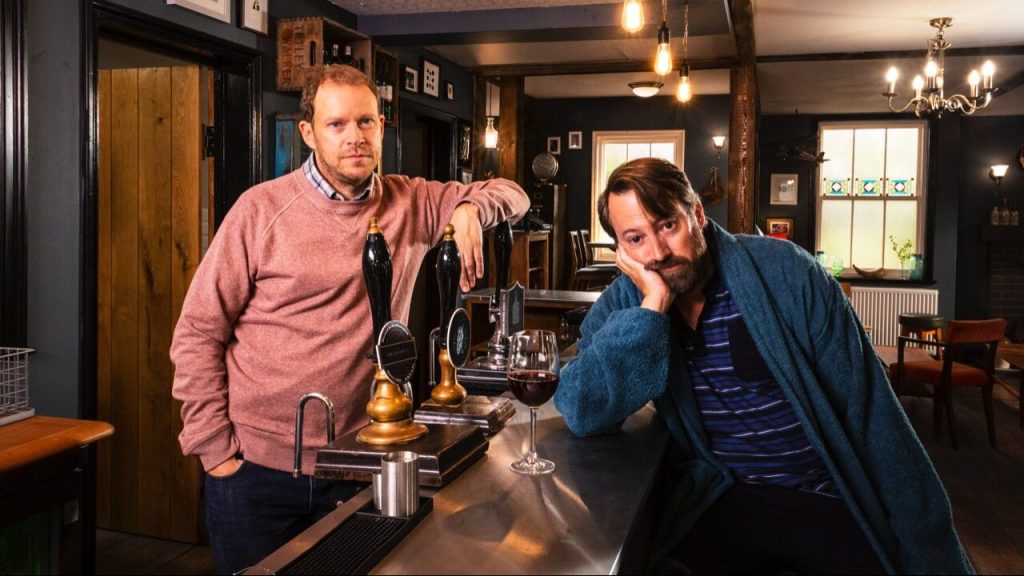 Big Talk Productions CEO Kenton Allen is typically straight when reflecting on 2020. “A disaster,” he says, surveying the economic wreckage of Covid-19 over a Zoom call from his home in London last month. Like countless others, the pandemic has blown a huge hole in Big Talk’s earnings and created unthinkable headaches for the company, which should have been celebrating a very healthy 12 months. But Allen, a gruff optimist, is celebrating the wins of the coronavirus crisis, rather than wallowing in what went wrong.

For starters, Big Talk managed to convince the BBC and Amazon to commission a second season of Stephen Merchant comedy-drama The Offenders before the first had even been shot. Known for monosyllabic comedy hits including Rev and Mum, the production firm also finally wrapped a second season of Channel 4/Sundance Now’s Back after a bewildering run of setbacks, both Covid and non-Covid-related. Another Big Talk show, Friday Night Dinner, turned in an imperious performance for its sixth (and likely final) season, becoming Channel 4’s highest-rated comedy series ever. Meanwhile, Allen is also marveling at a development boom that took place during the months of downtime.

“It’s been incredibly challenging, incredibly stressful, incredibly anxious-making, but also incredibly creative,” Allen says, drawing on a cigarette as he perches on a balcony bathed in winter sun. “To have six or seven months purely to really focus on development and have the space to be very specific about what it is we all love — the slate is as probably as strong as it’s been in the 12 years of Big Talk.”

The Offenders is a project that Allen is particularly chipper about. It’s quite the turnaround from nine months ago when the six-part series was forced to down tools after just 12 days. Allen grimaces recounting the “mortifying” experience, which he says was like “looking into this deep dark well of oblivion.” But during those grim moments, Allen got a call from the BBC asking if Merchant would write Season 2 in the months cameras were not rolling. “To which we said, ‘We’ll write Season 2 if you commission Season 2,’” he recalls. The BBC and Amazon agreed on the basis that both seasons would be shot back-to-back once production remounted. A virtual writers room was quickly assembled and Merchant went to work on new ideas for his show, which stars Christopher Walken and centers on a group of seven strangers observing their community payback sentence in Bristol, England.

“We used the benefit of having shot on the scripts already to know more about it before we turned over. We were able to rewrite Season 1 to reflect what we know is going to happen to the characters in Season 2. We were able to deepen it and layer it,” Allen says. The former BBC executive was awed by the work ethic of Merchant, who also stars, directs, and co-produces The Offenders through his Four Eyes outfit. “His ability to be creative and focused in an environment that didn’t really lend itself to creativity and focus was exemplary,” adds Allen.

It is, after all, a passion project for The Office co-writer Merchant, who co-created the series with Elgin James and drew on his experience of being raised by parents who ran a local community services project. This shone through in his first scripts for the series and helped land Big Talk the quickest commission in its history, according to Allen. He sent the show to BBC chief content officer Charlotte Moore on a Thursday and the ITV Studios-owned production company had a green light the following Tuesday.

Filming is now back underway in Bristol, with the shoot slated to run until October 2021 — barring any major pause as a more virulent strain of coronavirus rampages through the UK. “It’s slower and we’re building some sets, which we weren’t originally planning to do. We’ve got a more controlled environment on some elements so we’re not on location,” says Allen, who is barred from visiting the set because of strict safety protocols. The team has planned the filming schedule around Walken, who is classified as clinically vulnerable in the UK due to his 77 years. “He’s not on set yet and doesn’t arrive until March. We’ve constructed the schedule in such a way that he’s not coming here during peak corona. He’s coming when we hope it will be safer and there will be a vaccine. The plan being is he will be vaccinated.”

Allen knows from hard-bitten experience what it means to protect vulnerable stars on set following his work on Back with British actor Robert Webb. The comedy, created by Veep writer Simon Blackwell, returns to Channel 4 on January 21, but it’s taken more than three years to get to this point after the first season debuted in September 2017. That’s in large part because Webb undertook a routine medical at the start of filming Season 2 in October 2019, during which it was discovered he had a heart murmur, which led to major open-heart surgery.

“The prognosis was that he had about six months before something much more serious would have happened,” Allen explains. “We managed to carry on shooting for another two weeks using body doubles and then we shut down. We got five weeks under our belt. Robert was signed off for four months. We restarted the shoot in mid-February of this year (2020) and we shot for four weeks, obviously being careful of Robert, and then we got shut down on March 16 [because of coronavirus] — at which point we were two days away from completing.”

Back, which reunites Webb and his Peep Show co-star David Mitchell, became something of a guinea pig for ITV Studios’ efforts to restart production last year. The two-day shoot became six days with safety protocols including actors performing against iPad screens. Were there ever any fears that the shoot was cursed? There were obviously worrying moments, says Allen, but ultimately the commitment to the second season was steadfast.  “Channel 4 and Sundance have been amazing. Obviously, it didn’t get any cheaper… as broadcasters they never waivered.”

Season 1 follows Webb’s Andrew as he turns up at the funeral of his foster father and, to the consternation of his former foster brother, Stephen (Mitchell), wheedles his way back into the life of his old family, becoming the archetypal cuckoo in the nest. Season 2 flips this dynamic on its head, with Stephen re-entering the lives of his family and trying to re-establish his role within it. Stephen and Andrew’s relationship does have echoes of Mark and Jez in Peep Show, and Allen hopes Back can become the next iconic series starring Mitchell and Webb. At the very least, the show’s in venerable company when it comes to big gaps between seasons, with Allen pointing out that Fawlty Towers and Absolutely Fabulous both suffered similar screen absences.

Big Talk etched its own landmark in the annals of British comedy history last March, when Friday Night Dinner returned for its sixth season with 4.3 million viewers — the biggest ever audience to a comedy series on Channel 4. The story reached what appeared to be a natural conclusion, with Adam (Simon Bird) and Jonny (Tom Rosenthal) finding love amid the chaos of their family life. Allen says that creator Robert Popper, who has written every single one of Friday Night Dinner’s 38 episodes, is now getting stuck into new projects. This includes a pilot planned for this year, titled I Hate You, which he is making with Big Talk. Allen is coy on the storyline.

“I don’t think Robert wants to write a series where they bring their wives and children around,” he adds. “Never say never, but I suspect that’s probably it for the time being. You never know. For the time being, we’re not planning to make any more Friday Night Dinner.” Instead, Channel 4 has greenlit a 90-minute documentary reflecting on Friday Night Dinner’s success and marking its 10th anniversary this year. Big Talk is currently shooting interviews for the film, which will broadcast in the spring. There remains hope of making a U.S. version of the show after CBS and NBC have both attempted adaptations. Allen reveals that the U.S. remake, titled Dinner With The Parents, is now in the hands of former Late Show With David Letterman writer Jon Beckerman.

Elsewhere in the U.S., Jury Duty, a remake of BBC jury duty comedy We The Jury, remains in a holding pattern at CBS after last year’s pilot was derailed by the pandemic. ‘It’s still alive,” Allen says. Big Talk is also planning to adapt its ITV2 jazz band time-traveling comedy, Timewasters, for ABC. A pilot is planned for the spring, but Allen is measured when discussing the U.S. slate. He knows first-hand that it can be a volatile market after a brutal experience in 2011, in which he found out that Big Talk’s remake of Free Agents had been canceled mid-season after an NBC parking attendant asked for his permit to be returned.

Otherwise, Allen says Big Talk’s development slate across drama, half-hour comedies, and feature films (where it boasts hits including Baby Driver, Attack the Block and, of course, Shaun of the Dead) is in good shape. The only trouble now is that the market is brimming with well-developed material competing for attention. “There’s an awful lot of projects out there that are in the advanced stages of development, so the competition has never been greater, but there’s an awful lot of buyers out there and they are beginning to think about 2022 after everything has been knocked back a year,” Allen says. 2020 may have been a disaster financially, but he’s confident Big Talk is well-positioned for the “bounceback” this year and beyond.

Paramount+ has unveiled the inaugural music slate for its new streaming service, highlighted by revivals of two of the most iconic music shows...
Read more
Hollywood

ViacomCBS spent the afternoon unveiling details about Paramount+, its rebranded streamer that will launch May 4, and now here is a roundup of...
Read more
Hollywood