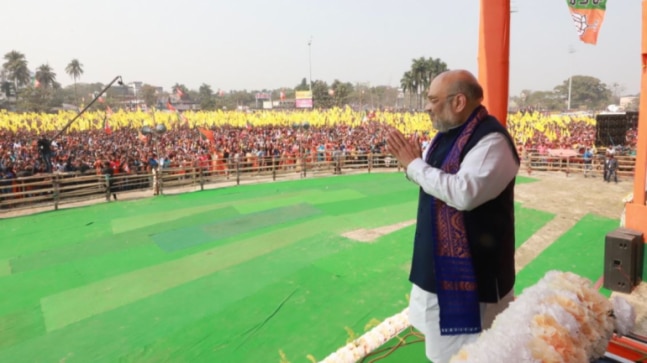 BJP rallies are usually a sea of saffron but then Cooch Behar is not a usual place. The erstwhile seat of the Koch Kingdom has its own colour and that is yellow. So when Union Home Minister Amit Shah descended on Cooch Behar’s mela grounds to address a rally, the ground was dominantly yellow. These yellow flags with Koch Royal insignia began dotting the town right as the morning broke. February 11 was a big day for the Rajbongshi community, a community that has had to survive on the occasional scrap thrown at them by the government in Calcutta, later Kolkata.

National recognition has been a pipe dream at best. When Home Minister Amit Shah decided to flag off the fourth leg of the Poriborton Yatra rally from the Rashmela Math in Cooch Behar, it was understandably a day not to be missed. Truck after truck, bus after loaded bus with the yellow flags tucked firmly in place began entering the town. The men and women made their way to the Rambhola School in the town, from where they began their padayatra to the Rashmela Math, with a section of them in position in front of the Madan Mohan Bari in Cooch Behar, to welcome the Home Minister.

HM Amit Shah was supposed to start his Cooch Behar visit with a puja at the temple, of the local deity, but ‘security reasons’ had other plans. After a two-hour wait, watching two helicopters fly overhead and make their way to the Cooch Behar airport, the people assembled saw Shah’s convoy turning left instead of making its way to Madan Mohan Bari and security reasons were cited. By the time the people waiting to welcome him at the temple realised what had happened, Shah’s voice boomed out of the loudspeakers: “This is the land of veers. Give me a louder welcome!” The voices answered in unison, “Jai Shri Ram!”

Home Minister Amit Shah attacked West Bengal Chief Minister Mamata Banerjee from the Rashmela Math, “My promise is that by the time the Bengal election comes to an end, Mamata didi will also say ‘Jai Shri Ram’.” Those three words, like all of Bengal and beyond knows by now, has not exactly gone down well with Trinamool Congress chief and West Bengal CM Mamata Banerjee.

Winds of change blowing in Bengal. People want to get rid of TMC’s violence, corruption and extortion.

Amit Shah also spoke on why the need for change: ‘poriborton’. “BJP’s Poriborton Yatra is not to change the Chief Minister, MLAs, or ministers. It is to end infiltration,” said the Home Minister.

After his speech at the Rashmela Math, Shah, flanked by a convoy of 20-odd cars and Cooch Behar Lok Sabha MP Nisith Pramanik, garlanded a statue of Rajbongshi leader and Kshatriya social reformist of Cooch Behar, Panchanan Barma.

Home Minister @AmitShah will address a rally in #CoochBehar today, mostly directed at the Koch Rajbongshi community in the region: comprising over 33 lakh people.
Scenes from the town.#BJP #ParibartanYatra #Bengal2021 pic.twitter.com/vB32gsrEjy

So HM @AmitShah skips Madan Mohan Bari and goes straight to the Rashmela Math to kickstart the #PoribortonYatra in #CoochBehar, leaving a section of locals disappointed with this last-minute change in his itinerary.#Bengal2021 pic.twitter.com/HZpbFkG5d2

When the Home Minister’s itinerary saw the last-minute change, a section of locals were disappointed. After all, the beginning of anything important has always been from the Madan Mohan Bari. Before leaving Cooch Behar, Amit Shah took care of that too: he paid a visit to the temple, the abode of the local deity, along with Cooch Behar Dakshin MLA Mihir Goswami. Shah ensured ‘national and global recognition’ for Rashmela and Madan Mohan Bari and blamed the state government for years of neglect.

Cooch Behar, in fact, the region called North Bengal has tilted towards the BJP. The Lok Sabha election is proof. But the Summer of ’21 will show whether the saffron will sustain the momentum and drive a change in Kolkata. The party in power in Kolkata is putting all its might to stop the BJP juggernaut. Amit Shah’s party is pushing hard.

13.92 lakh given Covid-19 vaccine in Uttar Pradesh so far

Power to block internet content in emergency been there since 2009: Govt

Power to block internet content in emergency been there since 2009: Govt Source Link
Read more