Home India Back To Classroom As Schools Reopen Amid Covid Concerns

Back To Classroom As Schools Reopen Amid Covid Concerns 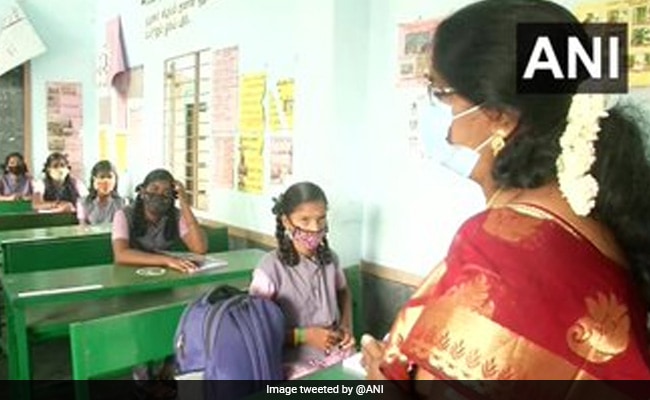 Delhi, Uttar Pradesh, Tamil Nadu, Telangana were among states that reopened schools today even as Covid vaccination for children aged 12 and above is expected to begin in October.

Amid concerns about the third wave targeting children, many experts are of the opinion that children’s in-built immunity will protect them from the virus.

States have been given a month’s time to ensure all school staff get at least one dose of the Covid vaccine, School Education Secretary Anita Karwal said after a meeting with state education departments on Tuesday.

In the national capital, which bore the brunt of the second wave of Covid in summer this year, decided to open schools in a phased manner. The decision could not be delayed any further as “an entire generation would otherwise suffer a knowledge gap”, said Deputy Chief Minister Manish Sisodia.

Vaccination of teachers, 50 per cent seating capacity in classrooms, lunch breaks in open area and the adherence to social distancing norms are some of the aspects being focussed upon as the state government tries to keep students and teachers safe.

“When we sought suggestions, we found that 70 per cent parents wanted the schools to open. A large number of parents insisted on the adherence to protocol. While experts told us that we could go ahead and reopen primary schools too, because younger children are at less risk, we thought of starting with classes 9 to 12,” said Mr Sisodia, who also is the Education Minister.

In Tamil Nadu, students returned to their respective institutions and were allowed entry upon thermal screening and provision of hand sanitizers while the face-mask rule has been made mandatory, officials said.

The SOPs include presence of 50 per cent students at a time. The government had mandated that schools should function six days a week and classes and sections have to be split into batches of not more than 20 students per classroom, according to the SOP, which was being implemented in the educational institutions across the state.

Online or distance learning will continue to be an alternate mode of teaching and students may be permitted to attend online classes if they prefer and those willing to study from home with the consent of the parents may be allowed to do so, the government had said.

Schools that were shut since last year ahead of the declaration of lockdown in March, got the green signal to open as the second wave of Covid abated.