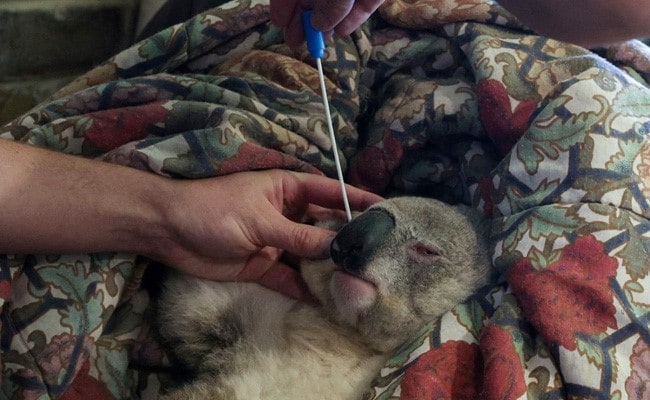 The koalas will each receive one dose of the vaccine.

About 400 Australian koalas will be vaccinated against chlamydia as part of a trial that researchers say they hope could play a significant role in the longer-term survival of the animals.

Chlamydia, a sexually transmitted disease also found in humans, has spread widely among Australian koalas, affecting half the animals in some areas.

“It is a cruel disease that causes debilitating conjunctivitis, bladder infections and at times, infertility,” Amber Gillett, Australia Zoo Wildlife Hospital Wildlife veterinarian and coordinator of research, said in a statement on Friday as the trial began.

The bacterial disease, which can be spread from mothers to their newborns, can also cause blindness, researchers say.

The koalas will each receive one dose of the vaccine and will be microchipped before being released into the wild.

“While this vaccination will directly benefit each of the animals, the trial will also have a focus on the protection provided by vaccination,” said Peter Timms, professor of microbiology at the University of the Sunshine Coast, which is leading the trial.

Although in many cases chlamydia can be treated with antibiotics, the researchers said they hope the vaccine will help improve the survival and reproduction of the animals.

Estimates of koala populations vary as they are difficult to count in the wild. A 2016 study ran by University of Queensland, calculated there were around 330,000 koalas left in Australia.

A study commissioned by the World Wildlife Fund estimated that more than 60,000 koalas had been killed, injured or affected in some way by Australia’s devastating bushfires in 2019 and early 2020.

Facebook
Twitter
Pinterest
WhatsApp
Previous articleMS Dhoni Gets An Adorable Hug From Sakshi, Ziva After IPL Win. Watch
Next article‘Succession’s Jesse Armstrong On The Dangers Of Creating A Monster – Deadline