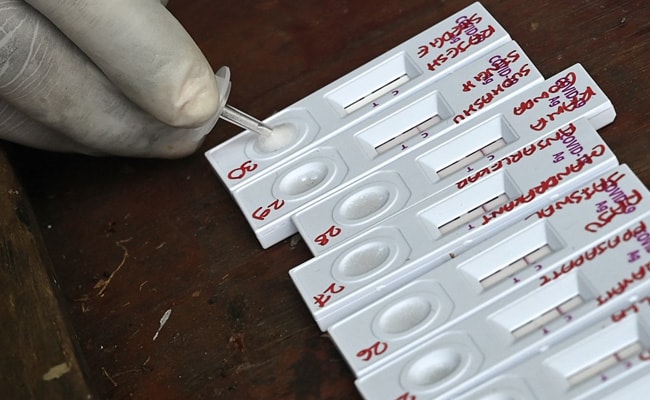 The case was reported at ICMR-RMRC in Assam’s Dibrugarh. (Representational)

In what could possibly be India’s first case of double variant infection, an Assam healthcare worker was found to be infected with Alpha and Delta variants. This is also a case of “breakthrough infection” as she was fully vaccinated, officials have said.

The case was reported at ICMR-RMRC in Assam’s Dibrugarh, the regional medical research centre for northeast.

Dr Biswajyoti Borkakoty, ICMR-RMRC, Dibrugarh, said a frontline worker from Dirubagh was found to be infected by two variants in April.

Calling it a “very rare case”, Dr Borkakoty said it is believed to be the first such case reported from India.

“This is the first case of double variant infection detected in India. No such case has been reported from rest of the country. The patient, who was fully vaccinated by March, was found to be infected with B.1.1.7, which is called the Alpha variant, and the Delta variant (B.B.617.2), which was first detected in India. She had mild symptoms. She recovered quite well and did not require hospitalisation,” Dr Borkakoty said.

Worldwide, he said, at least four cases of double variant infection have so far been reported.

A double variant infection is when a Covid patient is infected with two variants simultaneously or within a short period of time.

Another such case was reported from Portugal recently when a 17-year-old was infected with another variant while still recovering from a different variant.

In March, a 90-year old woman in Belgium died after being infected with the Apha and Beta variants of the coronavirus.

Last year, in July, a team led by Dr Borkakoty had successfully managed to isolate the COVID-19 virus (SARS-CoV-2) and by doing so ICMR-RMRC Dibrugarh became the third government laboratory in the country to register the achievement.

(adsbygoogle = window.adsbygoogle || ).push(); <!-- -->The peace process with militants in Karbi Anglong is about to draw to an...
Read more
India

(adsbygoogle = window.adsbygoogle || ).push(); <!-- -->Around 2,000 Karnataka-bound vehicles have been stranded (Representational)Pune: The Mumbai-Bengaluru highway continued to be...
Read more
India