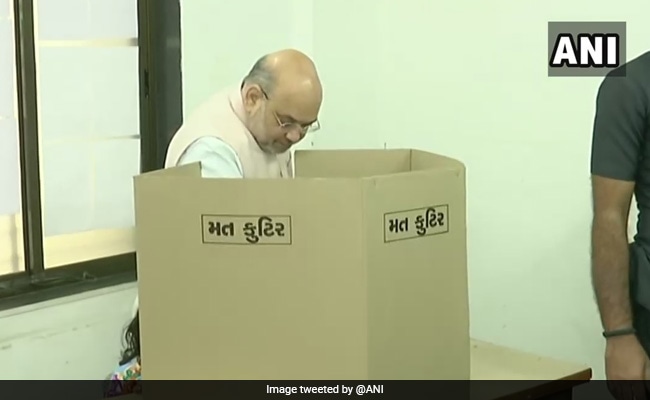 Amit Shah expressed confidence that the BJP will win the civic polls in Gujarat.

Union Home Minister Amit Shah on Sunday cast his vote at a polling booth here for election to the Ahmedabad Municipal Corporation and expressed confidence that the BJP will win the civic polls in Gujarat.

The BJP has ruled the six corporations for last several terms.

Mr Shah, who is enrolled as a voter here, exercised his franchise at a polling booth in Naranpura sub-divisional office of the Ahmedabad Municipal Corporation along with his family members.

After casting his vote, the senior BJP leader and his family members also offered prayers at the Kamnath Mahadev temple located nearby.

Later, talking to reporters, Mr Shah expressed confidence that the BJP will win the civic polls in Gujarat.

“The BJP has emerged victorious across the country under the leadership of Prime Minister Narendra Modi. I am sure that Gujarat, from where the BJP’s victory journey started, will again establish itself as a stronghold of the BJP,” he said.

Mr Shah said the development journey started by the BJP under PM Modi’s leadership continues across the country, and many states have taken inspiration from it.

“I am sure that voters will turn out in large numbers and development will win,” he added.

Tight security arrangements were made at the polling booth where Shah and his family members cast their votes.

The counting of votes will take place on Tuesday.

I truly salute all your efforts: Ayushmann Khurrana lauds CISF for working round the clock amid coronavirus pandemic in North East | People News

What Are The Likely Symptoms After Taking Covishield, Covaxin Vaccines