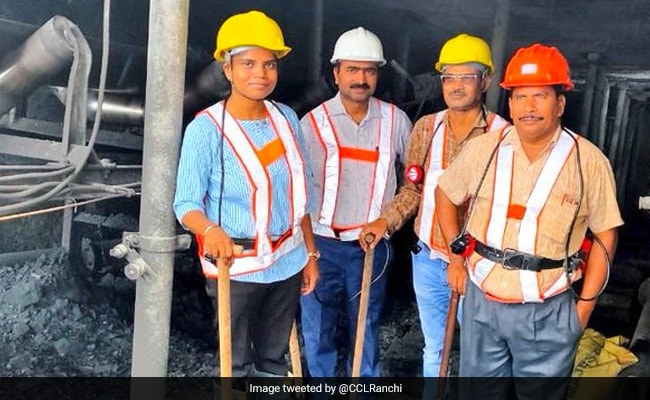 “A graduate of BIT Sindri, Ms Kumari broke the gender barriers by joining Churi UG mine, NK Area. She became the 1st women mining engineer in the history of CIL to work in underground mines,” read the tweet.

A graduate of BIT Sindri, Ms Kumari broke the gender barriers by joining Churi UG mine, NK Area. She became the 1st women mining engineer in the history of CIL to work in underground mines

In a statement released by Bihar’s Press Information Bureau, Central Coalfields said that its women employees have excelled in a number of roles, ranging from officer to doctor to security guard to even running heavy machinery. However, this is “the first time when the core mining activity of one of the biggest coal mining companies of the world will witness this progressive change.”

“The enormity of her achievement can be gauged by the fact that Akanksha is the second mining engineer in the Maharatna conglomerate Coal India Limited and the first woman to work in an underground coal mine,” the statement read.

A historic moment for gender representation!

Ms. Akanksha Kumari becomes the 1st woman mining engineer at @CoalIndiaHQ to work in an underground mine. pic.twitter.com/6qE6FteJyM

The official Twitter account of the Ministry of Coal also congratulated the engineer and wrote: “You are an inspiration to many women.”

A big congratulations to Ms. Akanksha Kumari to become the 1st woman mining engineer in @CoalIndiaHQ to work in an underground mine. You are an inspiration to many women. #WomenEmpowermenthttps://t.co/RltxP6ZVcx

A resident of Barkagaon in Hazaribagh district, Jharkhand, Akanksha Kumari belongs to the mining belt and witnessed mining activities from close quarters since she was a child. With a natural interest in mines, she opted to study mining engineering at Birsa Institute of Technology Sindri.

Ms Kumari says she received unflinching support from her family which allowed her to pursue her dreams.