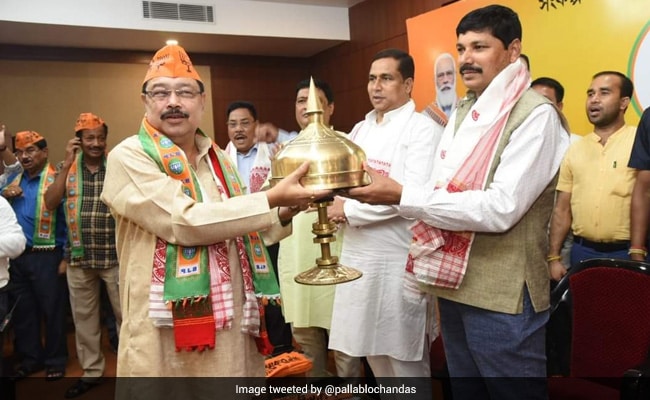 Mr Talukdar, who quit the AIUDF on Tuesday, became the third legislator to put in his papers and be a part of the BJP since the Assembly poll results were declared in May.

After putting in his papers, Mr Talukdar met Assam Chief Minister Himanta Biswa Sarma who welcomed him into the BJP fold.

“The faith of leaders across political spectrum in Hon PM Sri @narendramodi continues to grow. Happy to have met Hon MLA of Bhabanipur Sri Phanidhar Talukdar, who resigned from @AIUDFOfficial & will join @BJP4Assam later today,” Mr Sarma said on Twitter.

Mr Talukdar went to the state BJP’s headquarters and joined the party in presence of its president Bhabesh Kalita.

With this, the AIUDF’s strength in the 126-member House now has come down to 15.

Earlier, Rupjyoti Kurmi and Sushanta Borgohain had resigned from the Congress and switched over to the BJP.

Mr Talukdar said he will remain as a BJP member till his last breath and will work for the welfare of the people of the state.

Mr Kalita said, “We will give a ticket to Talukdar from Bhabanipur in the bypoll and he will surely win from there.”

Mr Talukdar had claimed that he resigned from the AIUDF for “the larger interest” of the people of his constituency as well as Assam.

He was a first-time MLA and had unsuccessfully contested as an independent candidate from Bhabanipur constituency several times in earlier assembly polls.

He later joined the AIUDF and fought the election held this year.

Talukdar got 55,975 votes as against ruling ally Asom Gana Parishad candidate Ranjit Deka’s 52,748 votes, thereby becoming the only Hindu MLA of the party that predominantly has a Muslim base.

At present, the BJP has 60 MLAs but Union Minister Sarbananda Sonowal is yet to resign from the assembly.

The ruling BJP’s alliance partners — the AGP and the UPPL – have nine and five MLAs respectively, while the Congress” strength is 27.

The BPF has three legislators and the CPI(M) has one. There is one Independent MLA also.

Two MLAs – one each from United People’s Party Liberal and Bodoland People’s Front – had died, while Kurmi and Borgohain had resigned from the House.