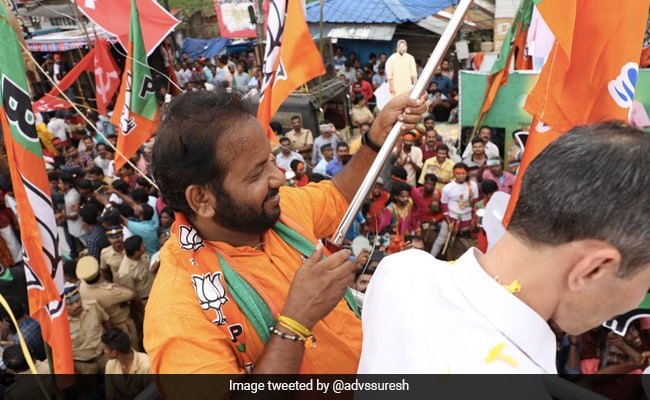 After weeks-long campaign sessions, marathon rallies and mammoth road shows, Kerala is all set to go to polls on Tuesday with 2.74 crore voters exercising their franchise to decide the fate of 957 candidates including high-profile leaders and independents in 140 Assembly constituencies across the state.

As the high-octane public campaign drew to a close last night, the southern state is now witnessing silent electioneering in which candidates and party workers are busy visiting homes and institutions to seek votes at the last minute.

An array of ministers and several sitting MLAs from both the traditionalcoalitions- the CPI(M)-led Left Democratic Front (LDF) and the Congress-headed United Democratic Front (UDF) are seeking another term in the April 6 polls.

The April 6 poll is equally significant for Kerala Congress (M) chief Jose K Mani who recently snapped decades-long ties with the UDF and joined hands with the Left front.

It would be a litmus test especially for Congress leader Rahul Gandhi personally as he had camped in the state for several days and taken part in dozens of corner meetings and rallies across Kerala to campaign for the UDF.

The ruling LDF is hoping to retain power for a second consecutive term breaking the state”s four-decades-old trend of alternating between the UDF every five year.

While the UDF is all confident to form their government when the results are out on May 2, the BJP-led NDA is leaving no stone unturned to garner maximum number of seats to become a decisive force in the state’s rule.

Since the Election Commission of India (ECI) announced the poll dates on February 26, Kerala had been witnessing unprecedented competitive spirit between all the three political fronts-from carrying out maximum number of rallies and meetings to bringing in all possible national leaders to encourage the voters.

In the place of one or two prominent national figures usually, the state this time saw multiple visits by leaders right from Prime Minister Narendra Modi, union home minister Amit Shah and a dozen of their cabinet colleagues including Nirmala Sitharaman, Rajnath Singh and Prahlad Joshi and UP chief Minister Yogi Adityanath to Congress leaders Rahul Gandhi, Priyanka Gandhi Vadra, Sachin Pilot, A K Antony, Salman Khurshid and so on.

The release of the election manifesto also drew much attention this time as the three fronts came out with populist promises including pension for housewives, raising of welfare pensions, free gas cylinders for poor, free laptops for economically backward students and so on.

To consolidate votes of majority community and keep devotees with them, the BJP even promised in their manifesto a law to contain alleged ”love jihad” and even a state legislation to protect the customs and traditions of the Sabarimala temple.

The topics of faith, religion, development and welfare have taken a centre-stage throughout the campaigns.

The state witnessed how the ruling LDF strived hard to bring focus of the poll debate on the agovernment’s achievements in the development and welfare fronts in the last five years and its much celebrated COVID-19 and flood management.

But, the Congress-UDF and BJP-NDA have tried their best to make a topic of discussion the Sabarimala women entry issue and the controversial gold and dollar smuggling cases, in which the Chief Minister”s office, Speaker P Sreeramakrishnan and some other ministers were facing allegations.

The LDF, who projected themselves as the sole saviour of minority communities especially in Muslim-dominated Malabar (north Kerala) districts during the campaign, is calculating that their votes would be consolidated en-mass in their favour.

They also accused the Congress of adopting a soft stand towards the Hindutva agenda to pick a hole in their vote-bank.

The Congress was seen reaching out to prominent figures and institutions related to Hindu, Christian and Muslim religions to ensure their support.

Besides wooing the majority community votes by promising a law to check ”love jihad” and protect the tradition of Sabarimala, the BJP also tried to reach out to the Christian community during the campaign.

Many national and state leaders of the BJP could be seen meeting the cardinal, bishops and church leaders during the period.

Since the 1980s, the LDF and UDF have alternatively formed the government with neither able to gain back-to-back victories in Kerala.

If the ruling front can manage to buck the trend in the state this time, it will be history.