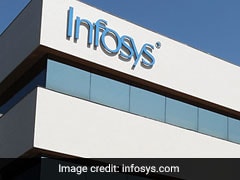 Infosys stated that it expects the annual revenue in the financial year to end-March 2021 to rise between 4.5 per cent and 5 per cent in constant currency terms, higher than two per cent to three per cent forecast earlier. The higher demand was also due to the larger deal wins during the third quarter. The company won several deals including a cloud partnership with German automaker Daimler AG along with a strategic partnership with British aero-engine maker Rolls-Royce.

“There is a huge move to accelerate digital spend, to do more things on the cloud and …we are now ready to participate and play to this strength massively,” said Salil Parekh, Infosys CEO in an online news conference. The banking, financial services, and insurance (BFSI) sector accounted for just over 33 per cent of Infosys’ total sales, its biggest revenue stream.

“We feel a lot more optimistic about banking and financial services on the back of lot of large deal wins,” said Pravin Rao, Chief Operating Officer. The company will hire around 24,000 staff from college campuses in the country next year. Analysts on average had expected profit of ₹ 5,050 crore for the company, according to Refinitiv data quoted in a Reuters report.

The company’s local rivals Tata Consultancy Services (TCS) and Wipro also reported a higher third-quarter profit, beating estimates. TCS net profit grew to Rs 8,701 crore in the third quarter, from ₹ 8,118 crore, a year earlier. Wipro reported a consolidated net profit of 20.4 per cent to ₹ 2,968 crore, while the dollar revenue growth was reported to be the highest in 36 quarters.

Facebook
Twitter
Pinterest
WhatsApp
Previous articleTrailer Watch: Andra Day Refuses to Be Silenced in “The United States vs. Billie Holiday”
Next articleIntel CEO Bob Swan To Step Down In February, Pat Gelsinger To Replace Him

<!-- -->The Indian equity benchmarks extended declines in afternoon trading on the back of losses in banking, metal and financial services shares. The...
Read more
Business