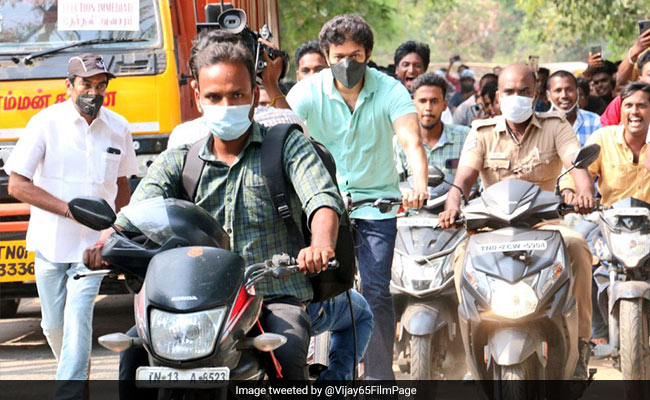 Actor Vijay today rode a cycle in Chennai to cast his vote in the Tamil Nadu election. The ride caused a near traffic jam and even a lathi charge as a crowd started following the actor on the streets.

In visuals that went viral online, Vijay was seen riding his cycle on a narrow road in Chennai, virtually surrounded by people following him on two-wheelers, taking photos. The movie star tried to pedal faster but could not escape his fans.

At the polling booth, as a crowd went into a frenzy, the police were forced to use lathis to chase people away.

Soon after the episode, there was speculation on whether Vijay wanted to deliver a message on fuel prices with his bicycle ride.

But his publicist clarified that the star did so to avoid parking problems in the narrow street where the polling booth was located.

“Thalapathy Vijay decided to go by cycle instead of using the car because the poll booth was right next to his residence and taking the car might have congested the road even more. There was no other intention behind it!” – tweeted Riaz K Ahmed tweeted.

The clarification came after many DMK leaders suggested Vijay was sending a message to Tamil Nadu’s ruling AIADMK, which has a tie-up with the BJP, on rising fuel prices.

Khushbu Sundar, who is contesting the election as a BJP candidate after quitting the Congress, said: “Actor Vijay pedaling to vote is not a message on fuel price hike. DMK should stop riding on someone else’s bike.”

<!-- -->PM has also held a series of meetings with government officials and other stakeholders (File)New Delhi: With the government opening the COVID-19...
Read more
Top Stories

100% Advance Till July Given To Serum Institute, Bharat Biotech: Sources

<!-- -->New Delhi: The government has given 100 per cent advance to two of India's Covid vaccine manufacturers till July, senior sources in...
Read more