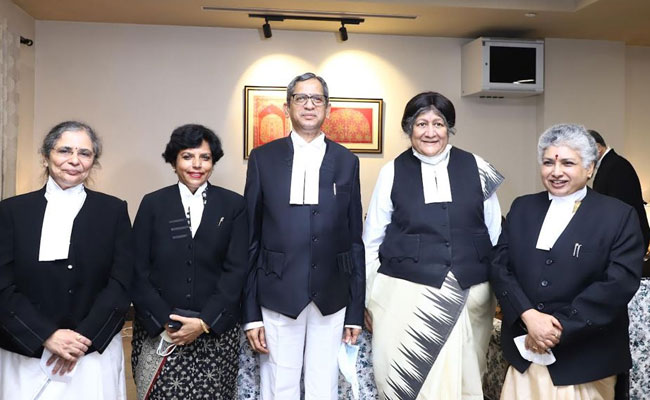 The previous high was three women judges — Justices R Banumathi, Indira Banerjee and Indu Malhotra were sitting judges from August 2018 to May 2020.

This elevation is also significant as the Supreme Court is set to get its first woman Chief Justice in Justice Nagarathna. Daughter of former Chief Justice of India E S Venkataramiah, she is in line for the post in September 2027.

Also, this was the first time when nine judges took the oath of office at one go.

To ensure Covid protocols, the swearing-in ceremony was held in the auditorium of the Supreme Court’s additional building complex and not the CJI’s courtroom where it is traditionally held.

“This is for the first time in the history of the Supreme Court of India when nine judges will be taking the oath of office in one go. In another first, the venue of the ceremony is shifted to the auditorium. This is done keeping in view the need for strict adherence to COVID norms,” said a press release issued by the top court’s public relations office.

Following today’s elevations, the Supreme Court now has 33 judges, including the Chief Justice, against the sanctioned strength of 34.

Facebook
Twitter
Pinterest
WhatsApp
Previous article“Depended On Pranab Mukherjee For Advice, Guidance”: Manmohan Singh
Next articleWindows 11 coming on October 5: But you will have to wait for one of its biggest features